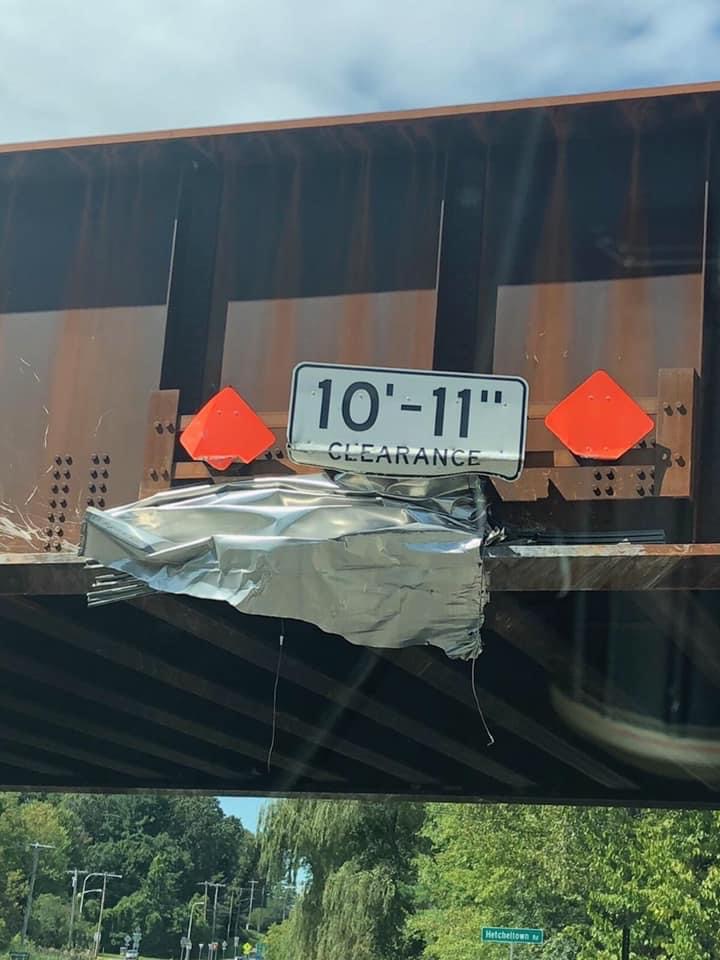 As a resident is sent to hospital after the Glenridge Road Bridge strike on Tuesday, Sen. Tedisco, MP Walsh and Glenville Koetzle’s supervisor call on the state to act now, exploring new legislation to allow municipalities to seek legal recourse to the state and railway companies to take action and stop repeated bridge strikes in Glenville

Another strike of the semi-trailers at the Glenridge Road railway bridge in Glenville, this time sending a resident to the hospital!

Tedisco, Walsh and Koetzle renew their repeated calls for the state to make major safety improvements in the area near the Glenrdidge Road Bridge Viaduct to prevent this from happening again and again. Tedisco and Walsh are also studying new state legislation to allow local municipalities to pursue legal recourse against dishonest state and railroad companies that refuse to put public safety first and take action. to remedy these situations.

Yesterday a semi-trailer struck the Canadian Pacific Railway bridge on Glenridge Road in Glenville, sending the driver of a car behind the truck to hospital with a neck injury after being forced to slam on their pauses as debris from the truck slid through their windshields. While the innocent driver has been treated and released, the next time this happens the results could be much worse.

There have been more than 100 bridge strikes and truck rollovers that almost got stuck in the bridge, causing traffic jams in recent years on the national road. It cost Glenville taxpayers well over $ 50,000 to respond to police, fire and road personnel.

“Enough is enough! We have told the state and the railroad over and over again that these strikes on the Glenridge Road Bridge are not only impacting our local economy, but are a clear and present danger to our people. residents, “said Senator Jim Tedisco.” Now our worst fears are based on an injury from a truck strike. Next time that happens, it could be a huge chunk of steel from a truck crashing into a car and killing a family. At this point, it is undeniable that Governor Cuomo, the New York State Department of Transportation (DOT) and the Canadian Railroad Pacific, owner of the bridge, know that the overpass over the Glenridge Road Bridge in Glenville is a road hazard. Clearly the state and the railways are failing in their duty to protect the safety of our constituents. We are currently conducting research. and we will support and propose a legislatio n to provide legal recourse to municipalities like Glenville, when in that case there is a failure to act by the state and the railways that could result in potential damage and loss of life. “

“Nationally, we are discussing what is in ‘infrastructure’. Well, there is no doubt that this railway bridge is a failing infrastructure and corrective measures such as increasing the height of the bridge, closing the underpass to all truck traffic, using a Commercial GPS in every large commercial vehicle — or a combination of these or other measures — must be taken immediately, ”said MP Mary Beth Walsh.

“We have continued to encourage DOT and CP Rail to rectify this situation. I call on both to lift the bridge before there are no more injuries or worse, a death. In the meantime, the DOT must immediately close the road to truck traffic, ”said Chris Koetzle, City of Glenville Supervisor.

In March 2021, Senator Tedisco and MP Walsh wrote a letter to DOT asking them to put in place a truck route that would prevent trucks from using Glenridge Road between Highway 146 and the “Glenridge Circle” at the intersection. Maple, Glenridge and Hetcheltown roads. This proposed truck route would begin at routes 146 and 146A; it would go down 146 to Aqueduct Road, to Maxon, then up Freemans Bridge Rd. All affected roads are exclusively state and county owned roads and would require DOT involvement to coordinate and execute a safe solution and profitable.

Tedisco and Walsh also requested the installation of an electronic detection system near intersection 146 so that it can adequately warn drivers that there is a low bridge ahead. This technology would be deployed at a location before Blue Barnes Road and Bruce Drive and before the truck entered the Glenridge Road corridor. Beyond these locations, there is no possibility for the driver to turn around, and therefore this placement would allow the safest options.

In 2019, Tedisco and Walsh wrote a letter to the Governor and the DOT to use state funding from the State Bridge Strike Prevention Fund to add adjustable electronic message signs, bridge lighting, communications enhancements to help local law enforcement redirect any potentially problematic vehicles; and a lift sensor similar to those that have been put in place in the Hudson Valley and Long Island.